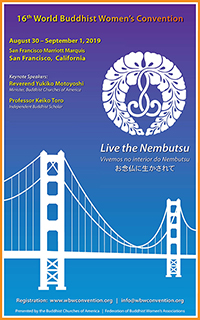 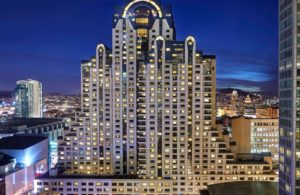 Approximately 2,000 women and men of many generations are anticipated to gather from Japan, Canada, Brazil, Hawaii, and throughout the US mainland to explore and experience the Convention theme: “Live the Nembutsu.”

The World Federation of Jodo Shinshu Hongwanji-ha Buddhist Women’s Association held the 1st World Buddhist Women’s Convention in Kyoto, Japan in 1961, and since then, the various member countries have had the honor of hosting the convention, held every 4 years or so.

The Convention is an opportunity for Jodo Shinshu followers to gather together on an international level; meet new people, learn together, share experiences, and spread the circle of Dharma followers today and for generations to come. Originally, the Convention was held for women only; however, over the years, it has welcomed all, men and women, in the Jodo Shinshu Sangha or spiritual community.

The objective of the World Federation is based on the doctrine of Jodo Shinshu as its principle:

In Appreciation to Sponsors